On October 30, 2018, a conference with international participation on the topic “Sensory ethnography of the city” was held at the University of Plovdiv, which was attended by researchers from Bulgaria and France. Papers with a research approach to the city through the senses and sensory were presented. The event created a space for exchange and dialogue, which outlined possible fields for research and application of sensory ethnography as an approach to the city and its spaces, sensory and sensitivity, subcultural communities, institutions, people with disabilities, everyday life and more. The presented papers will be published in a collection of scientific texts.

During the conference, an interactive sensory exhibition was opened, which presents the applied nature of the research project and which interprets the interaction between people with visual impairments and institutions. At the exhibition, everyone could put themselves in the place of a person with disabilities or a social worker. The exhibition was a wooden square structure that mimicked a reception room. It has two compartments – one only for employees and another – for citizens who will use the service. Audio instructions were provided to guide the visitor in the various sensory tasks. A set of different odors were also placed, which as a result of the research were indicated as the most common in the receptions of the institutions. The goal was for everyone to be able to realize the difficulties on both sides through sensory tasks. For example, in order to experience the experiences of a visually impaired person, one of the tasks of the visitors was to fill in blindfolded documents. Following the audio instructions, he / she had to complete the task using a specially designed template that makes it easier for people with visual impairments to complete documents.

Sensation and sensoryity can benefit people with disabilities and their interaction with institutions as institutions become more sensitive. Their material base, such as offices, receptions, etc., needs to be more accessible in a sensory way for people with disabilities. For example, in cases when people with visual impairments have to fill in their documents, sign their declarations in order to receive some social services. They cannot perform these activities on their own, nor can they ask a social worker to do it for them, as by law he / she is not allowed to fill in any documents of the citizens. In this case, the visually impaired person is forced to trust a random citizen by providing him with his ID card. With some improvements in the environment of institutions, this may change. For example, embossed landmarks such as strips and sills can be installed to help orient in the middle. Mobile devices and applications are often used to make it easier to navigate in an urban environment, why not implement them in one institution. Another example is to use templates to fill in data in declarations, to place audio instructions or other similar sensory devices to visually direct difficulties and thus to be more independent and to exercise their civil rights. The exhibition presents the two points of view – of an employee and of a citizen with difficulties, not privileging one position over the other, but building a dialogue between the two so as to achieve better understanding and communication. With this exhibition, the project team calls for us to take the place of the “other” more often, because this will help us live better together. 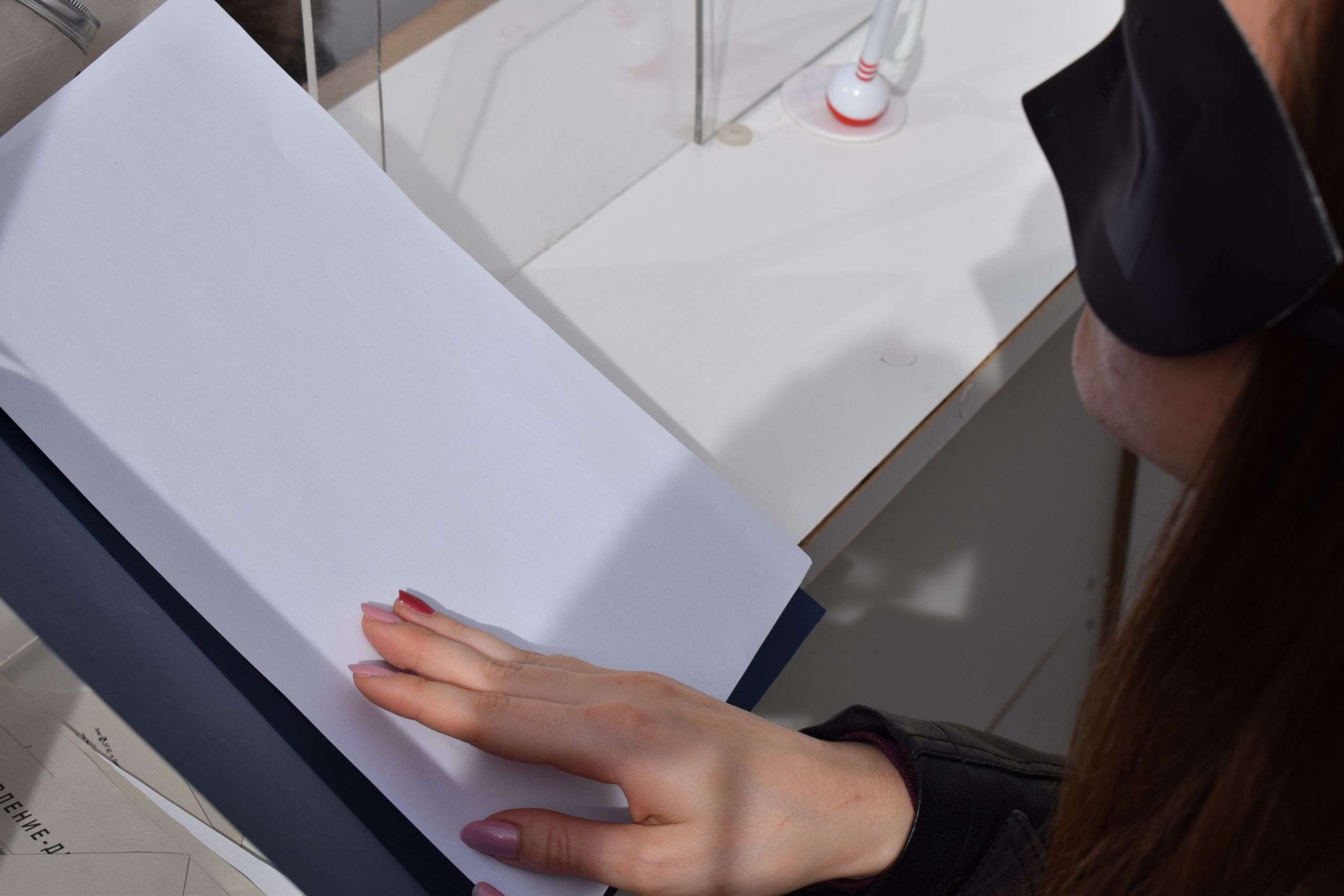 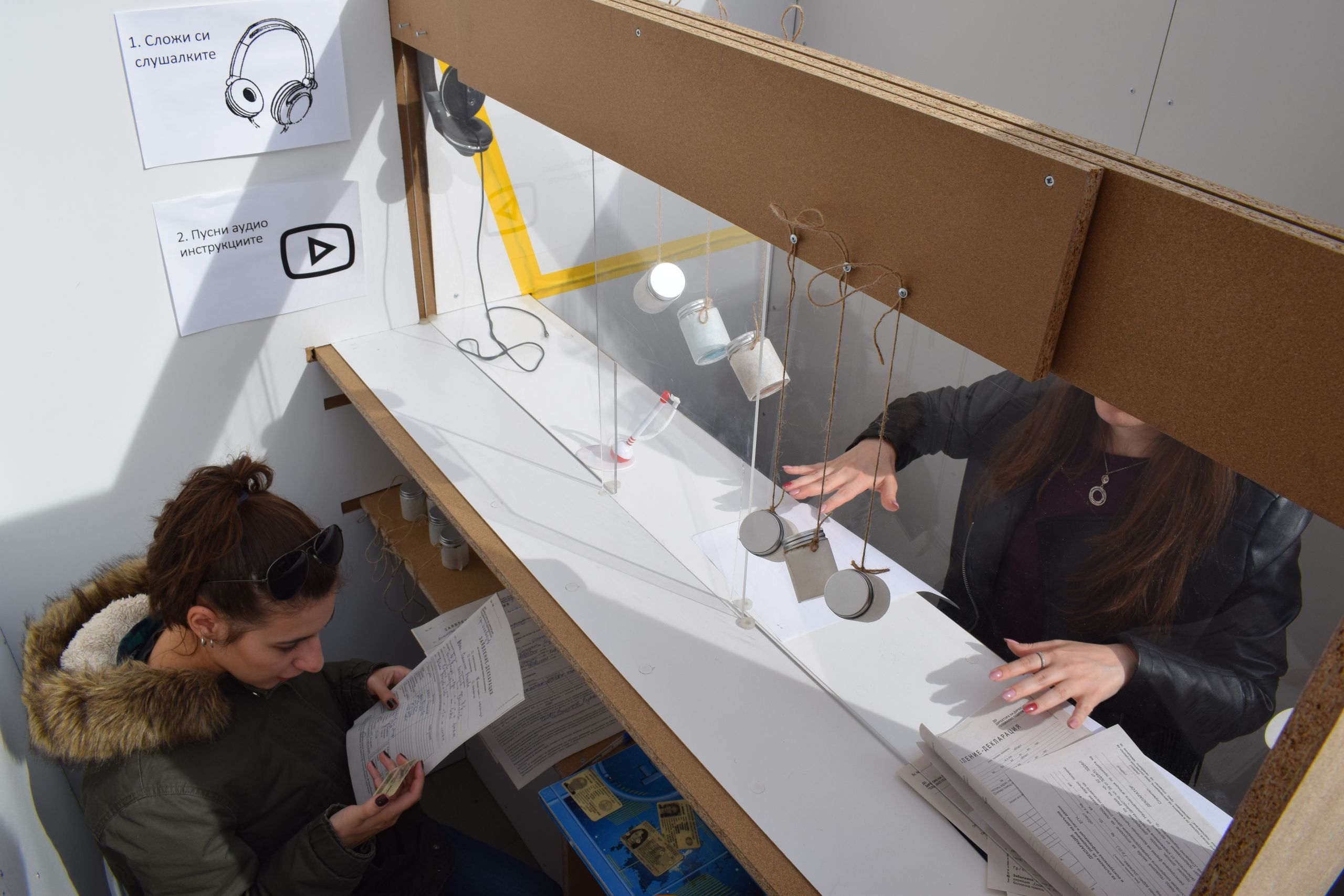 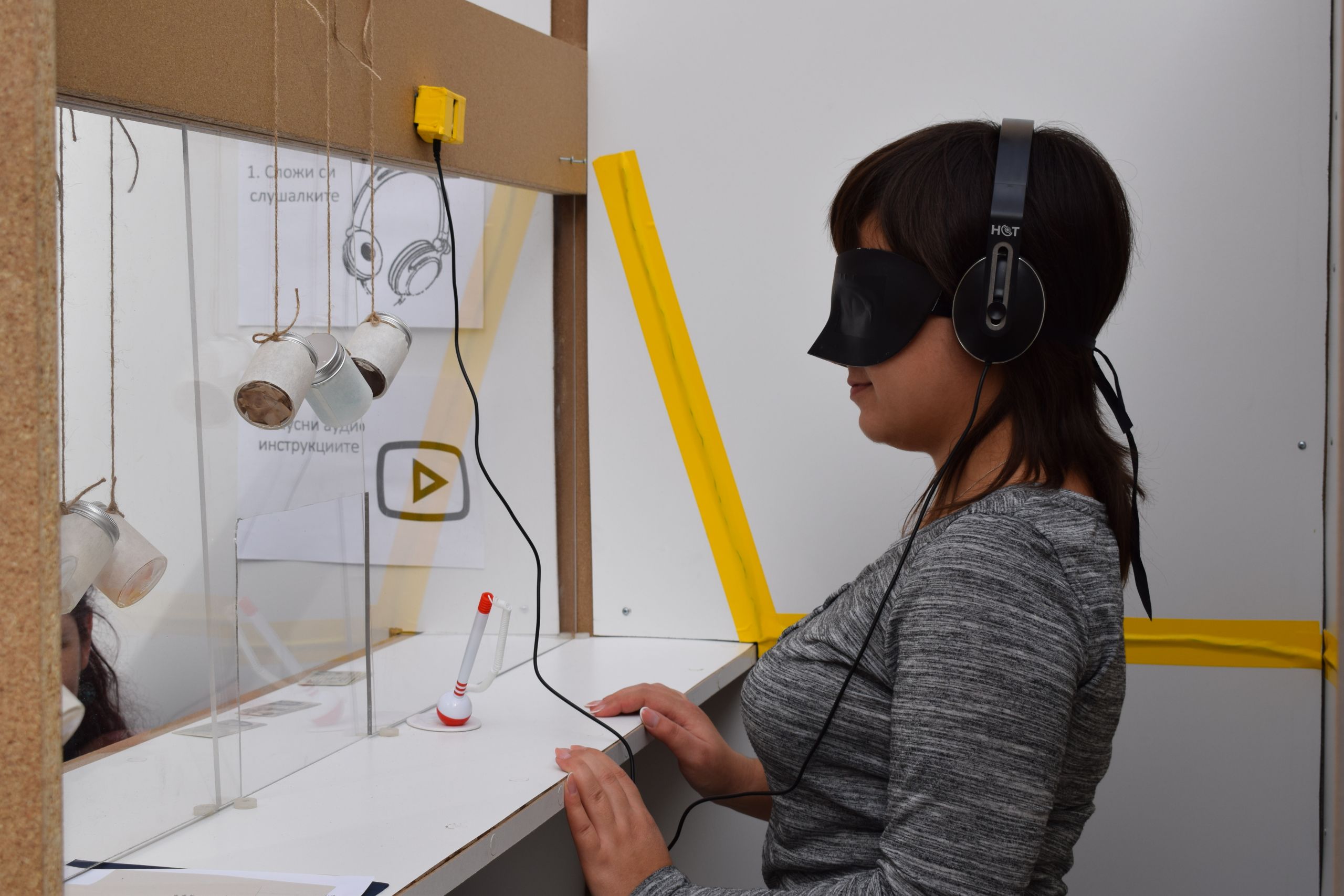 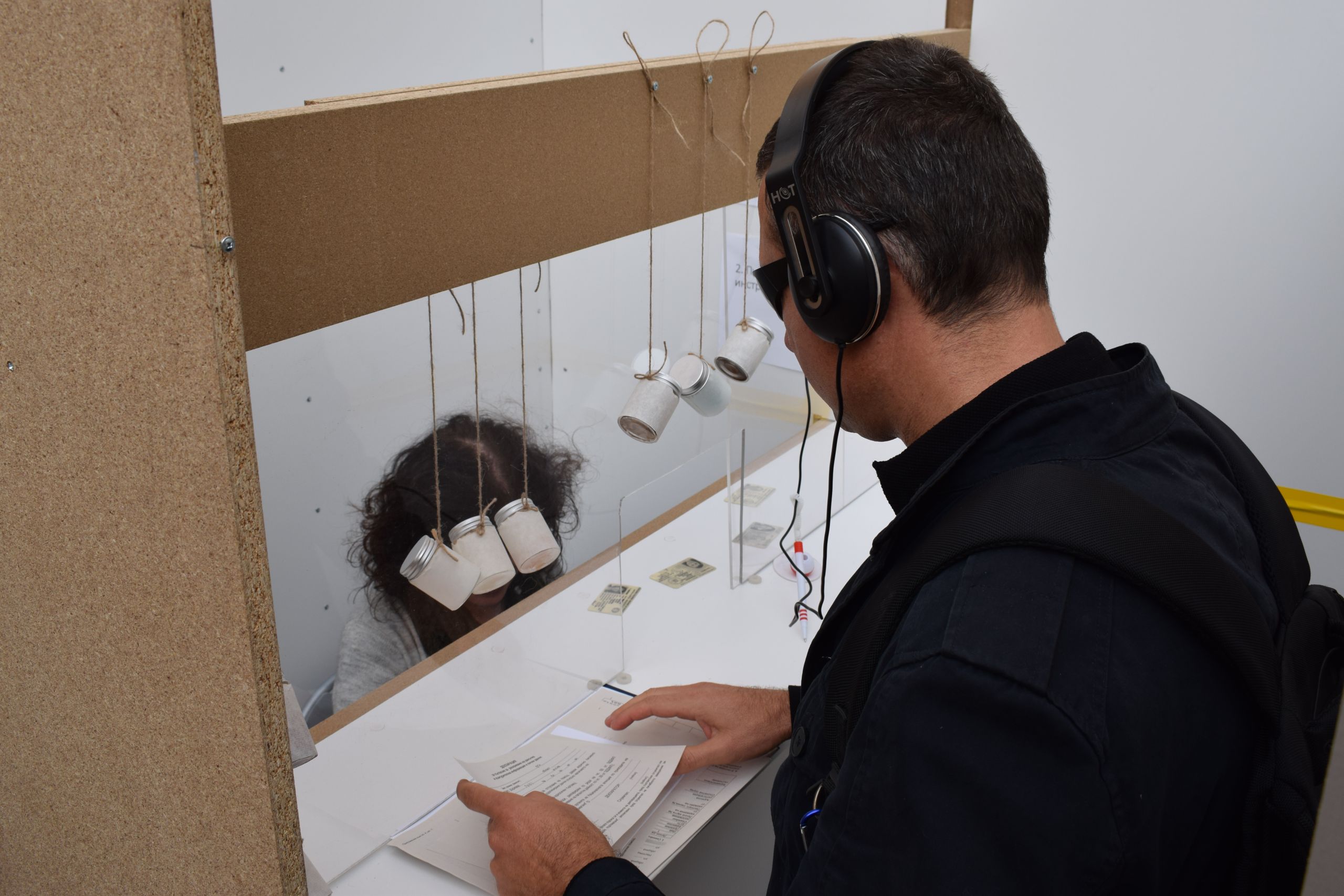 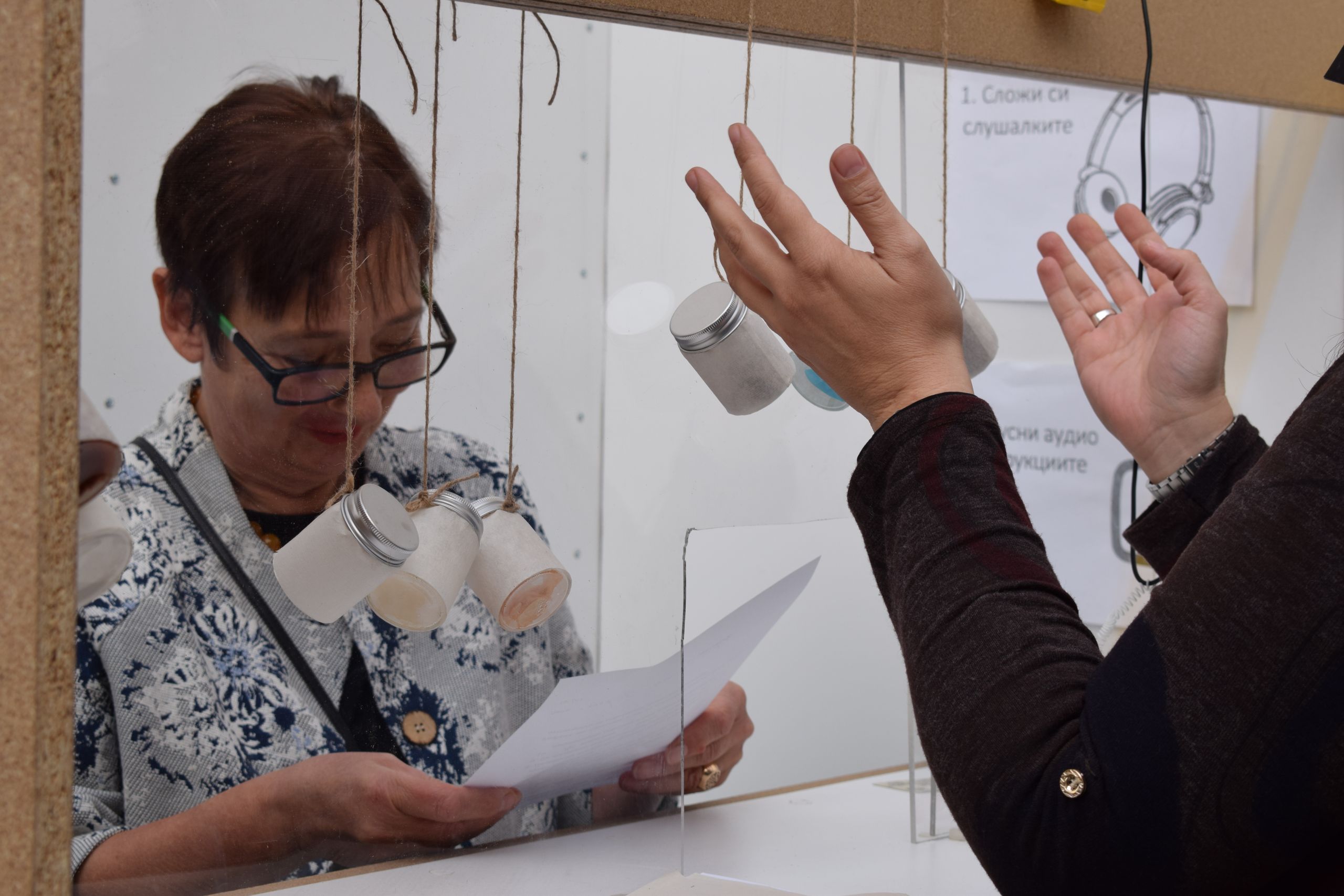 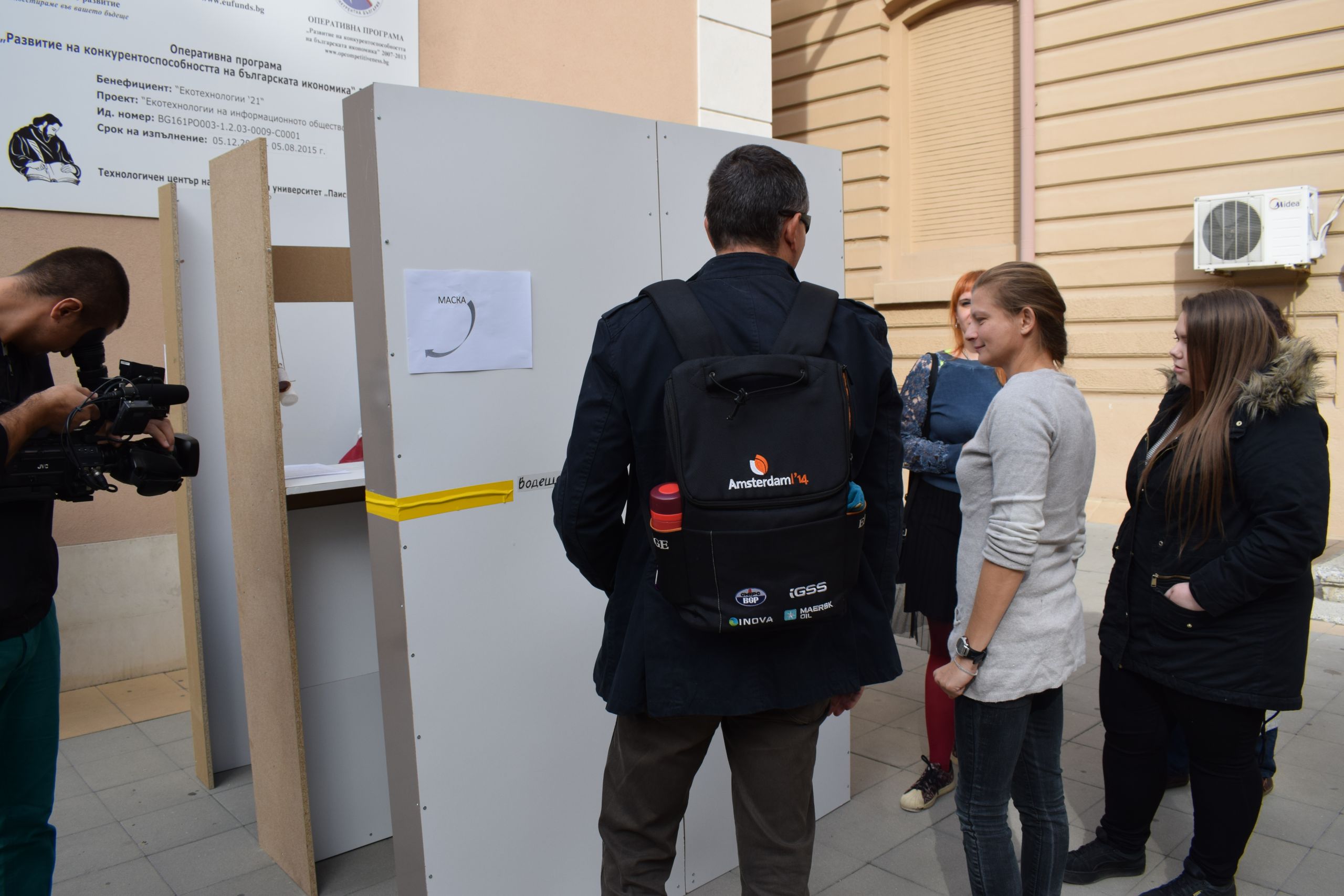 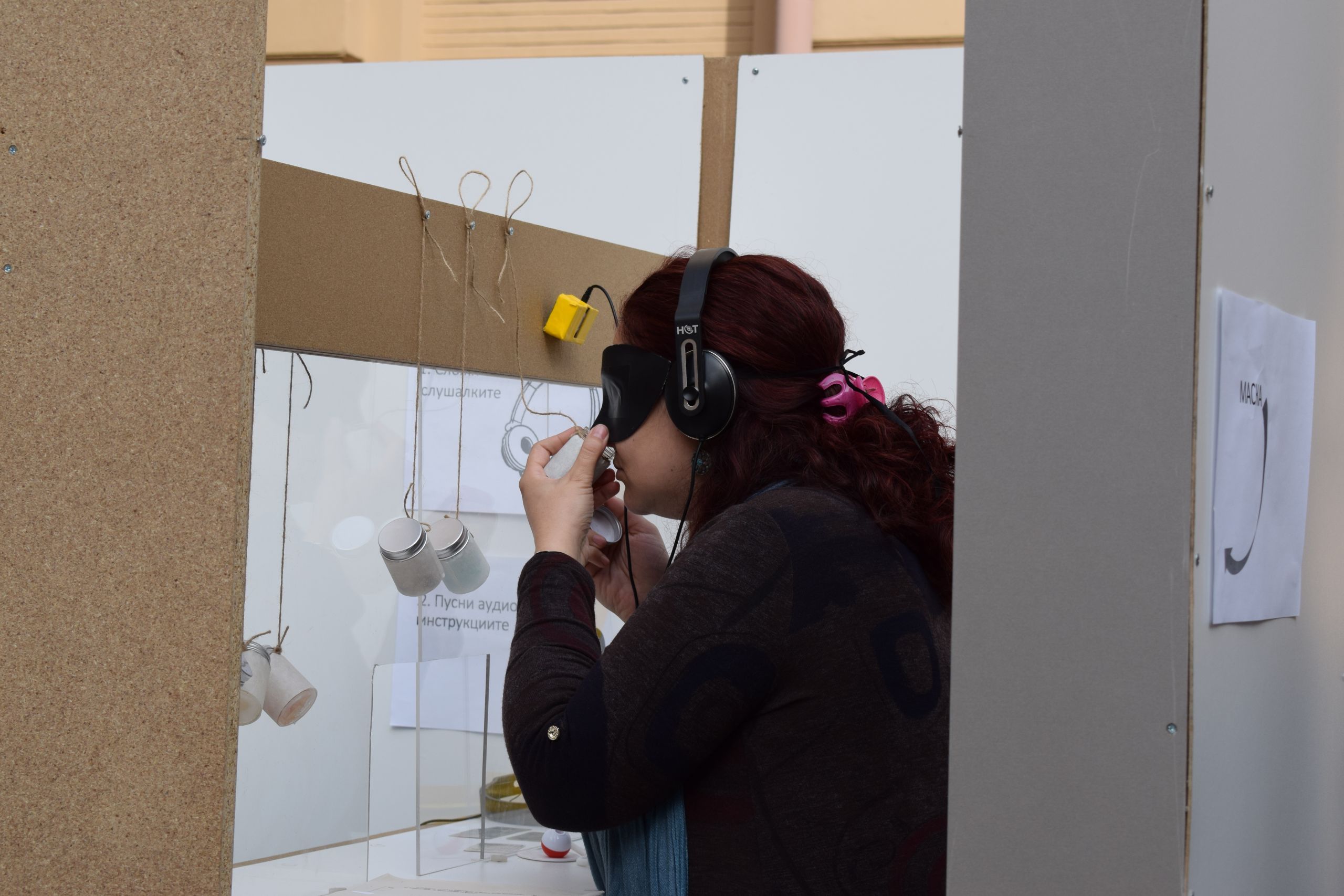 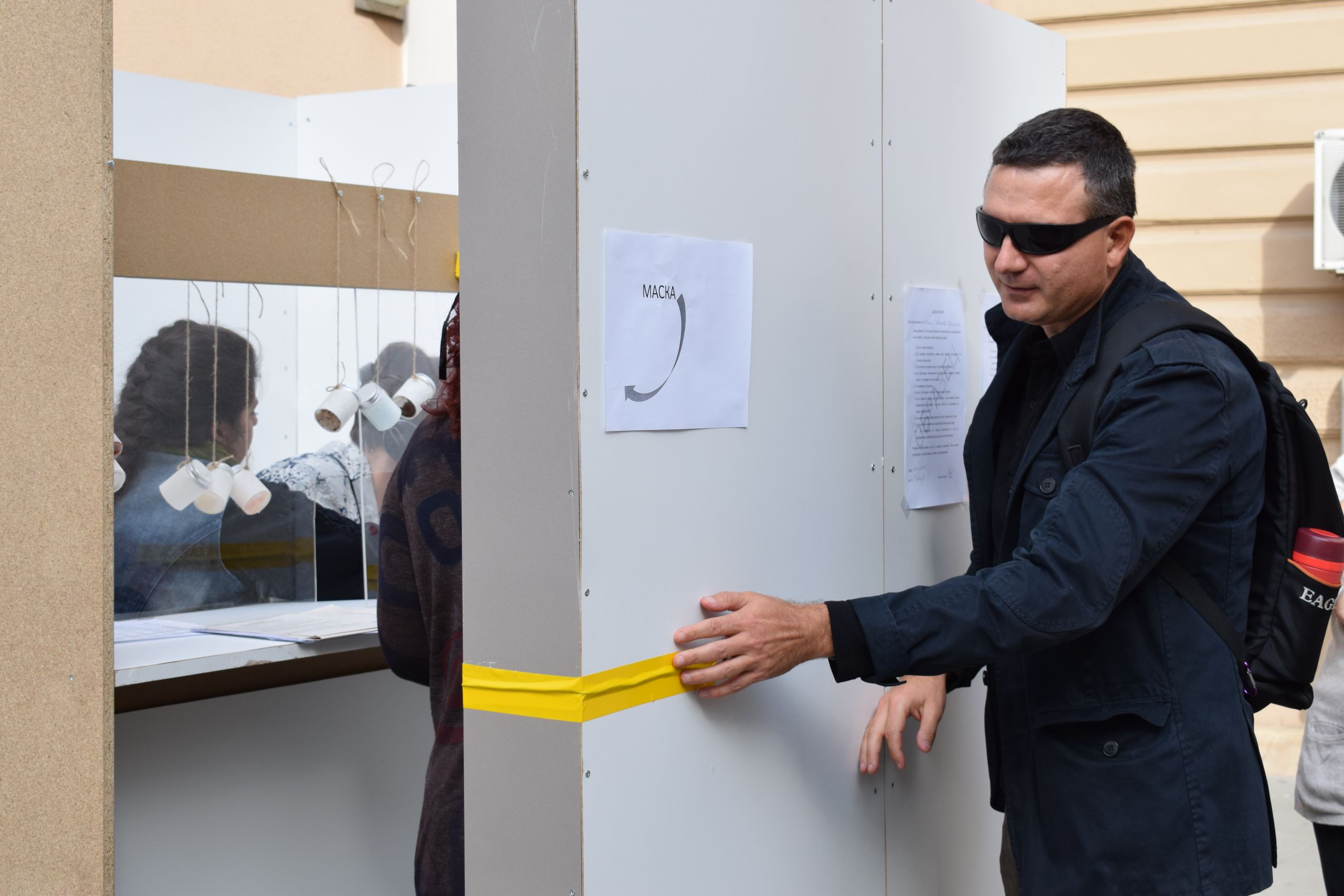 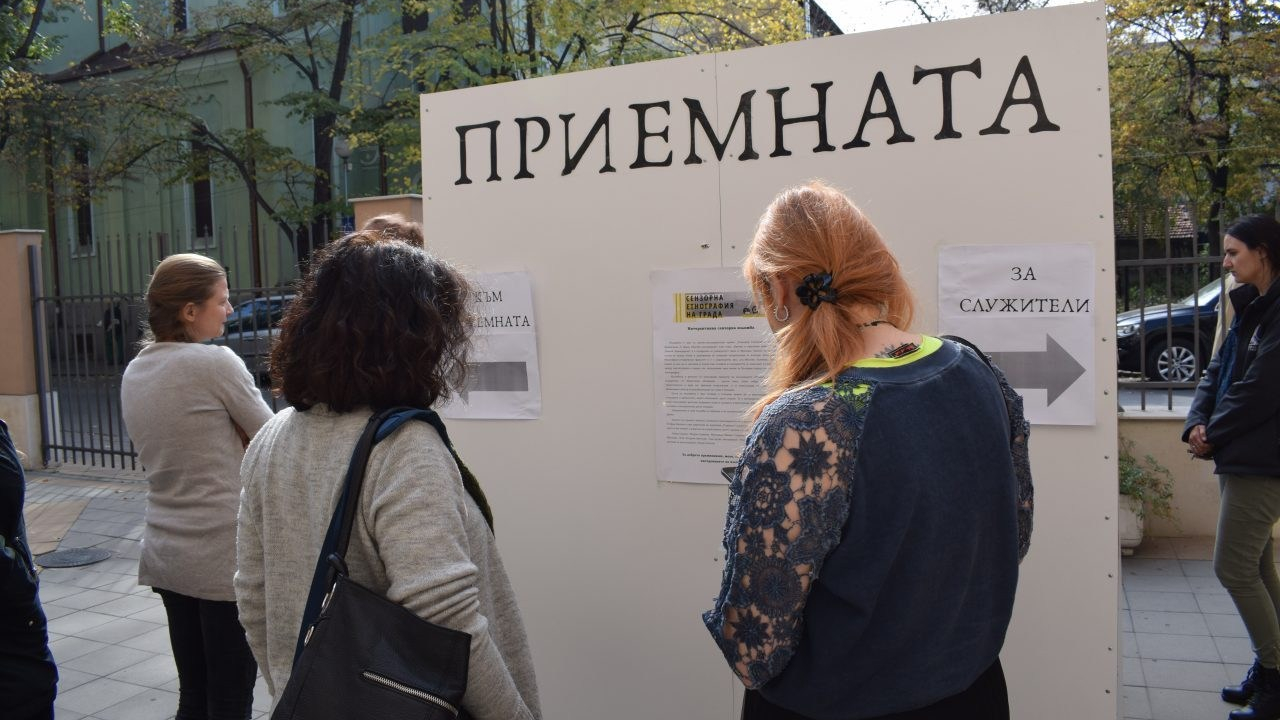 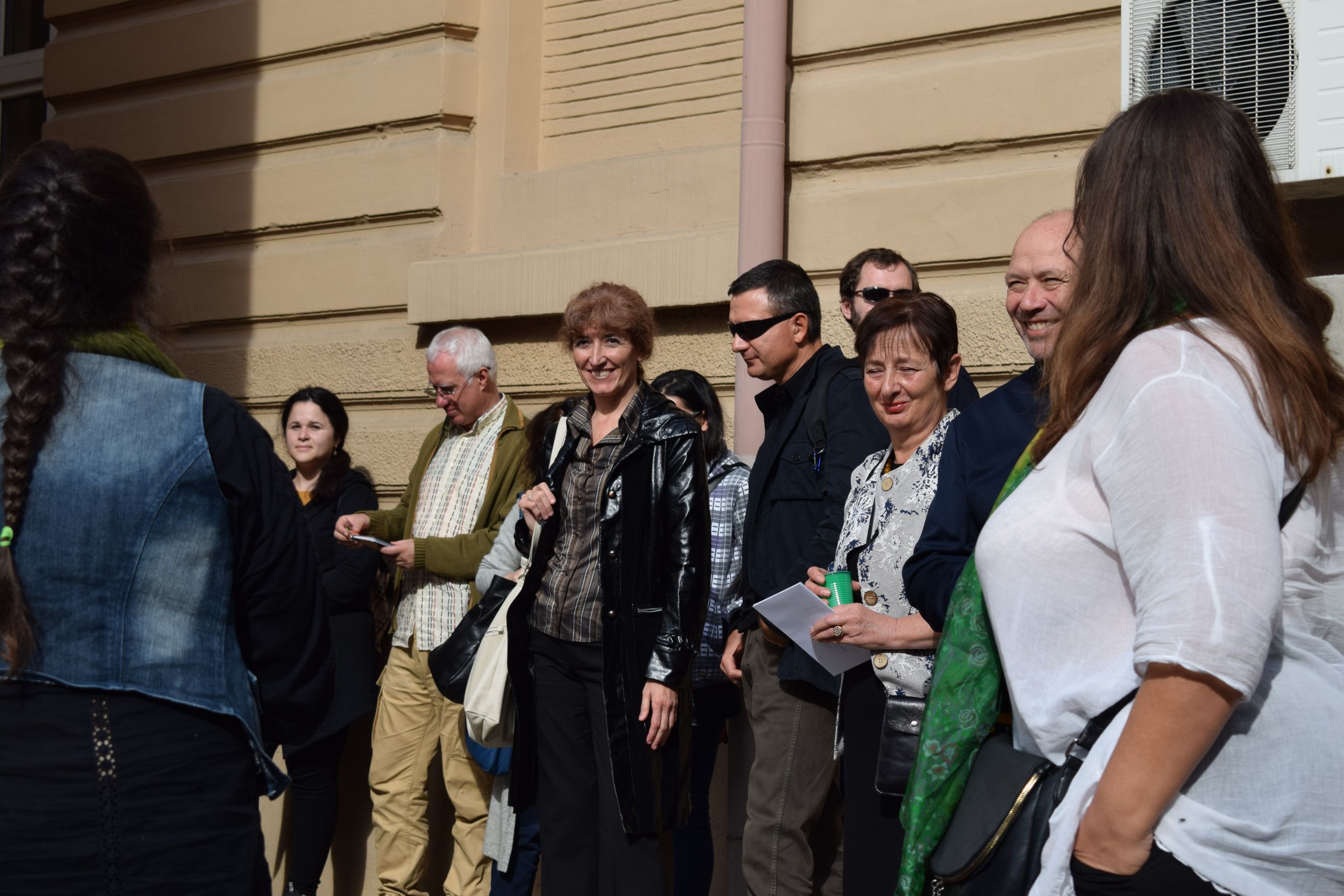 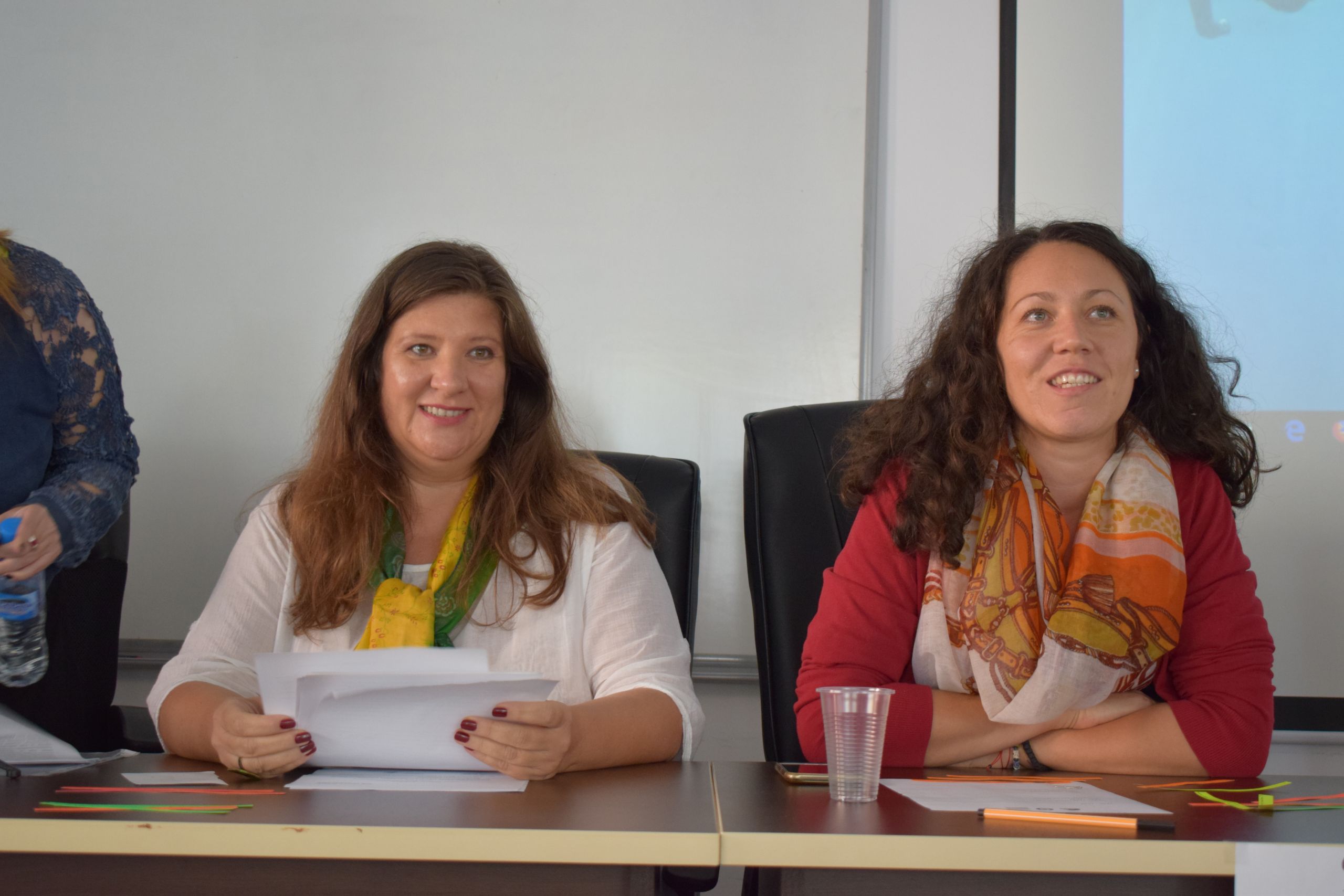 In the spring of 2018, a round table was held on the topic “Institutions in” dialogue “with citizens with disabilities”, to which people from the institutions and citizens were invited. The word dialogue is in quotation marks because the project team observes the difficulties based on the different sensibilities of the citizens in communication with the institutions. And also the difficulties that social workers experience together with their inability to be sufficiently sensitive due to the lack of specialized training for working with people with disabilities. During the round table the accessibility and the role of the senses and sensory in the interaction between institutions and citizens with disabilities were discussed. The focus was on the policies that apply to people with visual impairments and the ways in which the senses can be present when working with people with visual impairments. One of the important results of the round table was the discussion and formulation of solutions and proposals on the topic.

“Sensory ethnography of the city” is the first research project of its kind, developed and implemented by young scientists from the University of Plovdiv “Paisii Hilendarski”. The project was implemented within 2017-2018, funded by the Department of “Scientific and Applied Activities” at the University, headed by Assoc. Prof. Dr. Meglena Zlatkova and team members Nadia Taneva, PhD, Anelia Avdzhieva, PhD, Svetoslava Mancheva, PhD, Ph.D. student Maria Slavcheva and PhD student Petya Petrova. The aim of the project was to explore and describe how the senses of sensuality are used in the relationship between institutions and people with disabilities. The project is supported by the University of Lyon 2, France.

Sensory ethnography is an approach in ethnology and anthropology that involves fieldwork. This includes talking, observing their relationships and their cultural patterns. In this project, the terrain is the city as a common place to live with an emphasis on the sensuality of the city, which shows all not only visible but rather invisible connections that connect urban residents. In addition to what is perceived as the dominant sense – vision, we use our other senses in contact with the city, ie. we hear, we touch, we smell the city. The project focused specifically on the city dweller and the institutions. Our daily lives often involve communication with various institutions. In this communication there is a need to understand the ways of interaction and the use of sensory and sensitive information. In some institutions, people with different types of sensory disabilities find themselves in situations of misunderstanding, and sometimes inability to exercise their civil rights. The project team is focused on field work in two institutions: the Social Assistance Directorate and the National Center for Rehabilitation of the Blind (NCRC) in Plovdiv, where the communication between the institutions and the citizens is observed. In addition to scientific tasks, the project set itself highly applied tasks. Past events to him show some of them.